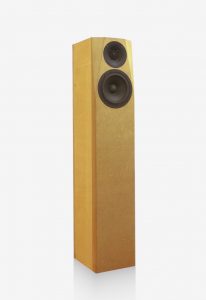 My loudspeaker Odysee started a few years ago and was based on various ready loudspeakers in the price range 1000-2000 Euro. Among them were models from KEF, Canton, Nubert, Elac, Phonar and Audio Physic. Of course they were not bad at all, certainly not. However, I have managed in my listening room with none of the speakers even come close to the stereo image that I have experienced while listening to the dealer in an acoustically good room. Consequently, I first dealt with the optimization of my listening room, but of course there are certain limits.

In the meantime, I also learned how important the bundling behavior of loudspeakers is. Here, however, virtually all ready-made speakers are very wide and uncontrolled emitting, apart from studio monitors. About different broadbands, I then switched to the DIY corner. And indeed, the stereo image in my room improved significantly with the increased bundling of broad bands in the treble range. The whole thing was bought with a very narrow sweet spot, audibly reduced resolution in the treble range and tonal errors. So the search went on.

Then I came across bundling concepts with Waveguide and thus very soon came across Alexander Heissmann. A short time later, I had the DXT-RLY at my home to test it, and was very impressed, as it combined controlled bundling with absolutely neutral reproduction, the room image was excellent, the sound was completely detached from the speakers. The only sticking point: I really wanted a small, slim floorstanding loudspeaker and not a shelf speaker ... However, Alexander was quickly convinced that a slim floorstanding speaker would be an excellent addition to his portfolio so And so it came about that Alexander (after a few nights of simulating, I assume ) gave the green light for a floorstanding loudspeaker based on the DXT-MON. I already had 2 Hypex DSP amplifiers from previous projects, so the whole thing should be fully active.

So Alexander put together a kit for me, wood came from the hardware store (28mm MDF for the front, 18mm MPX birch for the body), then it started with milling, gluing and sanding ...

Since I had already knocked a few speakers together, the milling of the chassis with the router and the assembly of the housing was no longer an issue. However, I had never attached beveled bevels, so that was new territory. For this purpose I attached steel strips (from the hardware store) with screw terminals. I first tried the foxtail method (sawing along the edge), but the saw was constantly jammed. I then switched to the orbital sander. With a 40er sheet, the MDF turned rather quickly into dust, the bevel succeeded perfectly. Alexander also told me about a method using a router, but I did not try that since the MDF was so easy to grind.

The second crux for me was the cutout for the bass reflex tube. I can only recommend to everyone to do the milling first on a test piece, because it feels like only a few micrometers can make the difference between “doesn't go in” and “crap, sits way too loose”. The rest then went quickly, damping with Alubutyl attached, wiring, damping in, chassis in.

For the final vote I drove with the two prototypes to Alexander, where we did the fine tuning of the DSP points, the damping of the speaker is still completely optimized and also carried out the final bass reflex tuning.

It was followed by a trial listening in direct comparison with the DXT-RLY. Both great speakers with naturally similar tuning, but the DXT-MON-STAND is already audible deeper into the bass cellar. Otherwise, she has all the virtues mentioned above:

After a long day of pink noise and hundreds of measurements, I happily drove home with 2 DXT-MON-STAND speakers and was never disappointed in the process! Thanks again, Alexander!
Oh, I haven't solved one problem yet: since I don't want to go without the speakers for a day, I haven't been able to do the final finish so far, the idea is to paint the front matt black ...

And that with the matte black finish has finally worked out 🙂 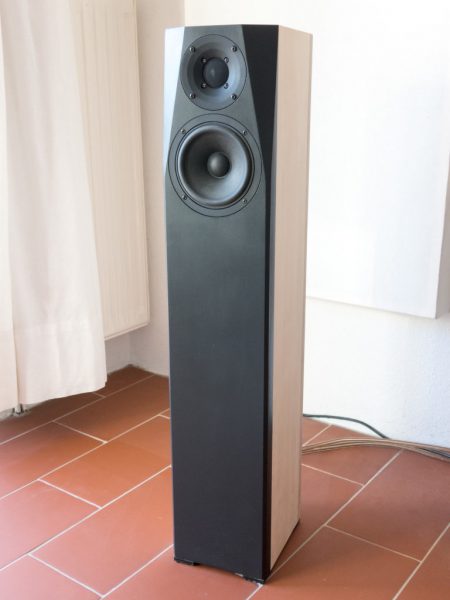