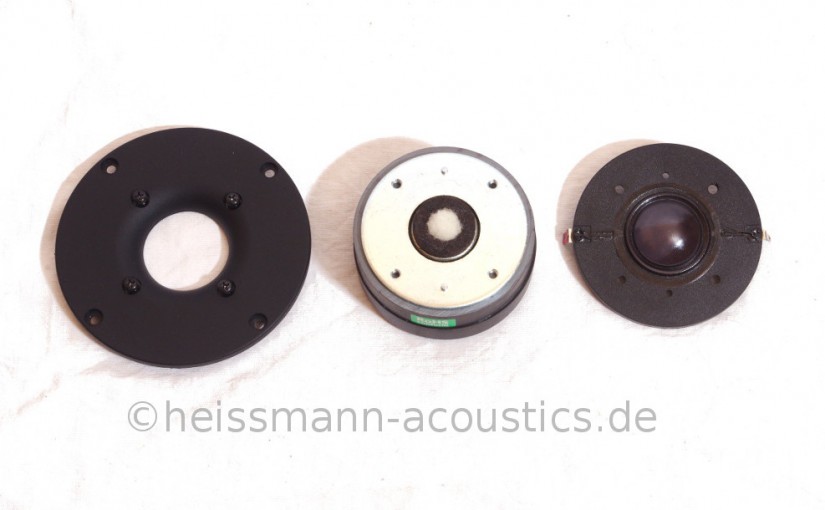 A customer request, whether in the sound and sound 06 / 14 (kit MonaLisa, developer Ronald Waßen) presented modification of the tweeter DT-300 synonymous in the Cinetor meaningful, I took the opportunity to perform this. 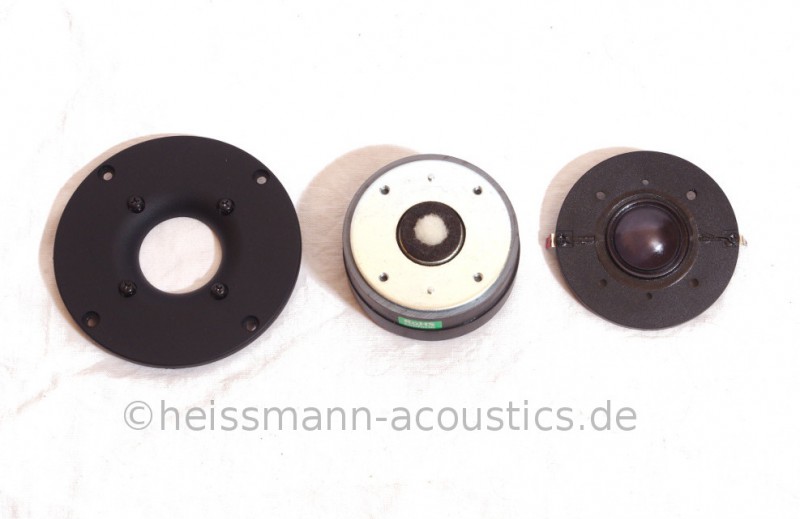 In the modification, the ferrofluid is removed, introduced into the Polkernbohrung insulation wool and glued a felt ring on the pole plate. A detailed guide can be found in the Sound and sound forum.

All measurements were made with Waveguide, in 20cm narrow baffle. 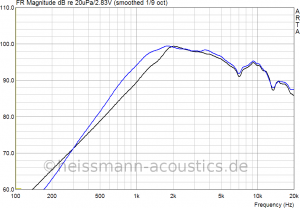 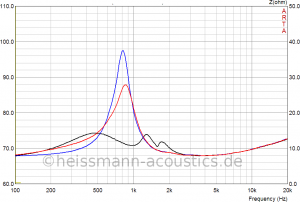 Significant influence of the modification on the impedance response. Clean and symmetrical impedance peak at 800Hz (blue). Compared to before (black), with a clearly flattened course and 3 impedance bumps (some DT-300 only show one double bump). In order to achieve a really clean and symmetrical impedance peak after the ferrofluid has been removed, the pole core hole must be tightly stuffed with insulating wool. The pole core hole was effectively closed acoustically by a 14x3cm long strip (blue). Compared to this (red) a little less stuffed, with a 7x3cm strip. The "new" impedance response allows significantly deeper separations, so the distortion measurements should not prevent this ...

... and you don't. No increased harmonic distortion. K2 between 800Hz and 2kHz is even slightly lower. Separations around 1,5kHz, possibly even deeper, should now be feasible!

Meaningfulness of the modification of existing systems 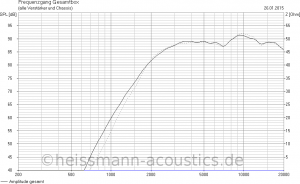 The example shows a separation of 2kHz with 18dB / oct. Dashed without, solid with modification. The frequency response in the working range shows slight deviations, but the slope changes towards the mid-bass, which can have a negative effect on the overall system. It is therefore not possible at this point to give a blanket "approval" for the modification of existing systems.

The modified DT-300 is the better DT-300. Significantly more beautiful impedance, more separable, more even decay, and minimally balanced in super high tone. Negative effects could not be determined.

The modification should not be done without control measurements. A simple impedance measurement, which can be realized with the free version of LIMP (part of the ARTA Family) and a material usage of 1-2 €, is completely sufficient.

It should be ensured that the voice coil is still well centered after the modification. There are a few factors that influence it.

Ferrofluid can compensate for small errors in the centering of the voice coil. It could happen that one, just before the modification just enough central voice coil, grinds or hangs after the mod at the air gap. 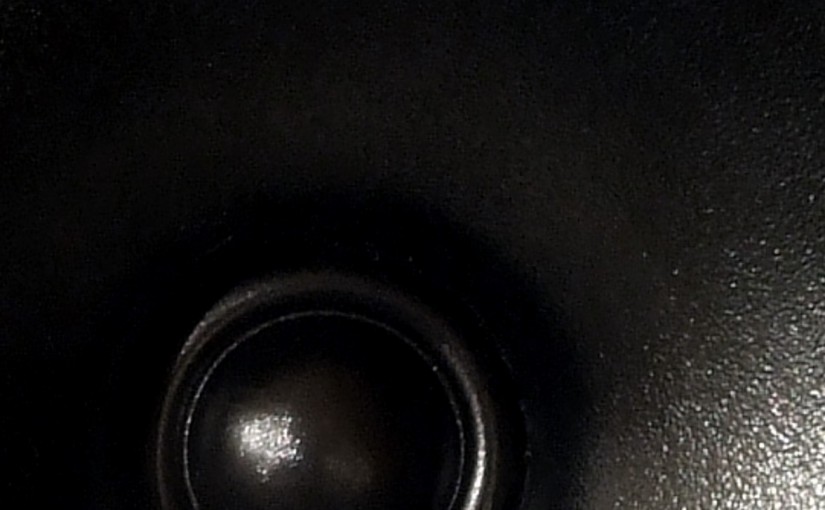 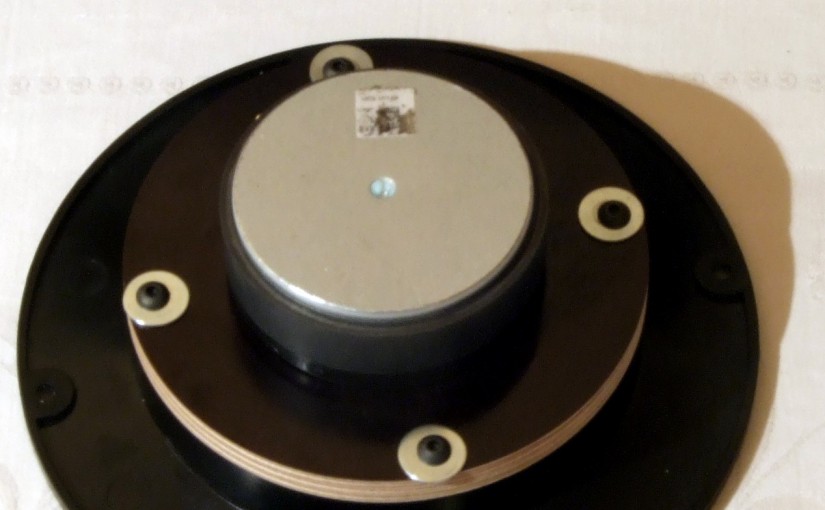 There are some tweeters from Scan-Speak and Tymphany, all of which share the same front panel. One or the other of them also measures itself excellently on the P-Audio (PCT-300), or Monacor (WG-300) waveguide.

In order to connect the drivers cleanly with the sound guide, an adapter plate milled in CNC was created after many test series, which allows simple and very precise installation.

The following tweeters are suitable for the conversion

Construction of the adapter plate with "home remedies"

With a jigsaw, cordless screwdriver, router and the following step-by-step instructions, building the adapter plate yourself should not cause any problems. It doesn't even have to be measured 🙂 Let's go ...

From the practice with the "home remedy method" another additional tip from Thorsten (www.felbi.at)

If you glue your artwork directly onto the substrate (eg MPX), you will have the difficulty to get it down again later. For visual reasons, that bothered me and came up with the following idea: Before you glue your artwork on the MPX, just past the MPX with tape. Now the artwork will be cut to the size of the MPX board. Spray glue is then sprayed onto the package tape and allowed to dry for about 5 minutes (Note the spray adhesive is not on the paper spray!). Now the print template can be glued on.

Once all drilling and milling work has been completed, the package strap can easily be pulled down again from the MPX board.

First, the front panel of the tweeter must be removed. On some models, this is easily fixed with a silicone-like adhesive. In this case, use a large slotted screwdriver to "pry" it up discreetly as shown in the following picture. Work slowly and evenly. The screws on the front panel should of course have been loosened beforehand (TX10). 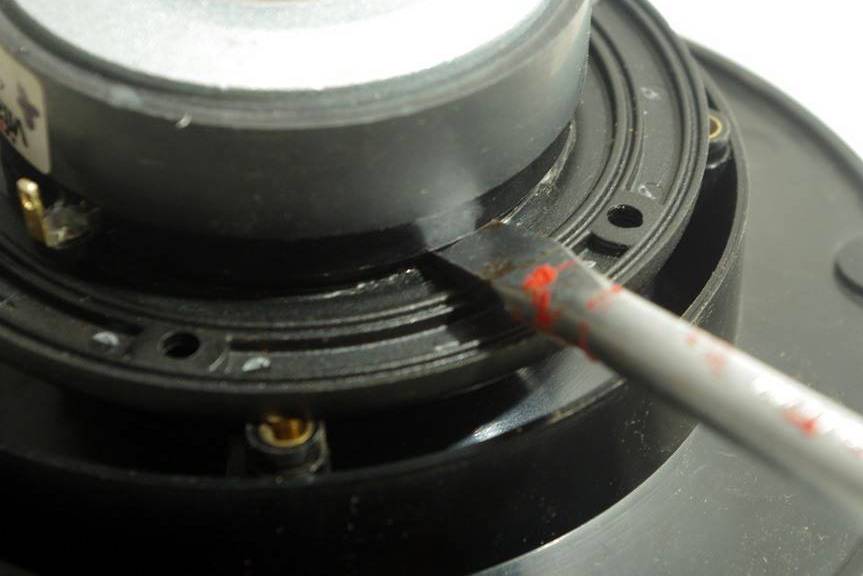 The adapter plate is placed on the sound guide and the neck is ground flat with circular movements (⇒ dust mask).

You do the conversion on your own responsibility! I accept no liability. Possibly. you lose your warranty claims during the conversion.

I made a lot of changes and nothing ever happened. I think the instructions are pretty "foolproof" 🙂

The plans of the adapter plate are the intellectual property of Heissmann-Acoustics.de, Alexander Heißmann. Any transfer requires my express consent. 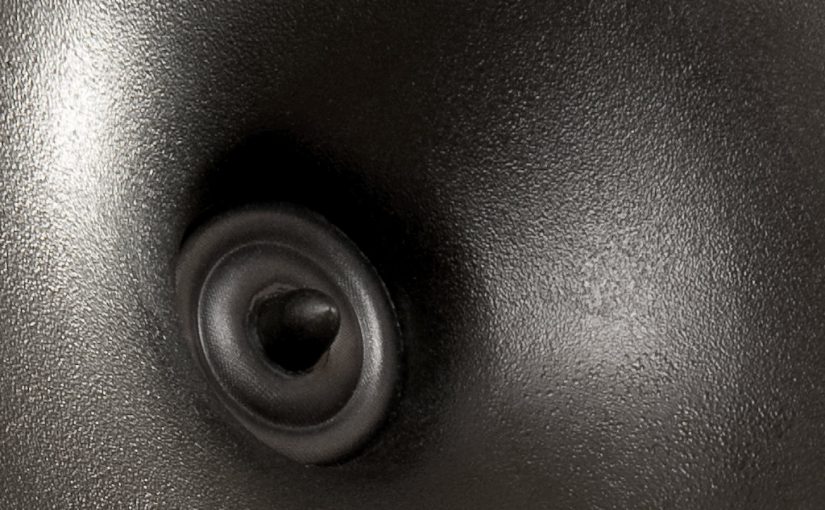 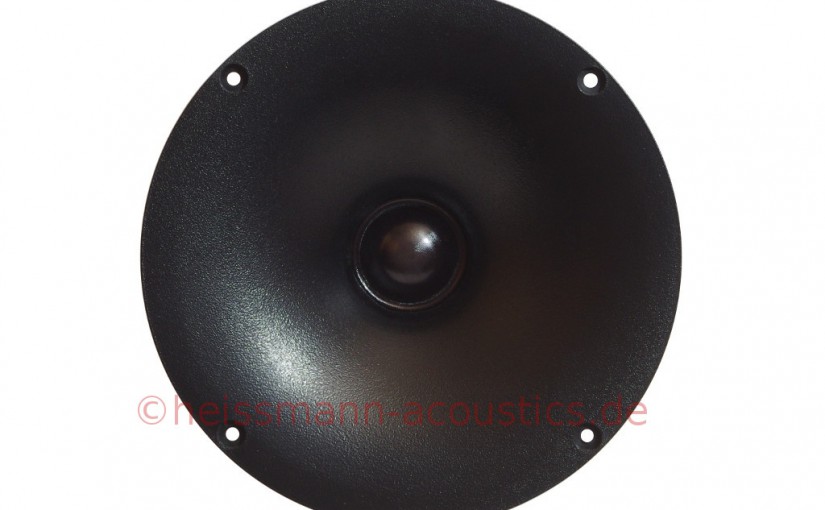