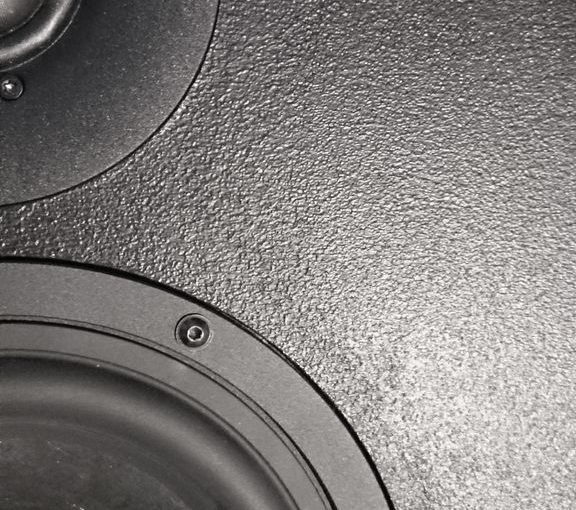 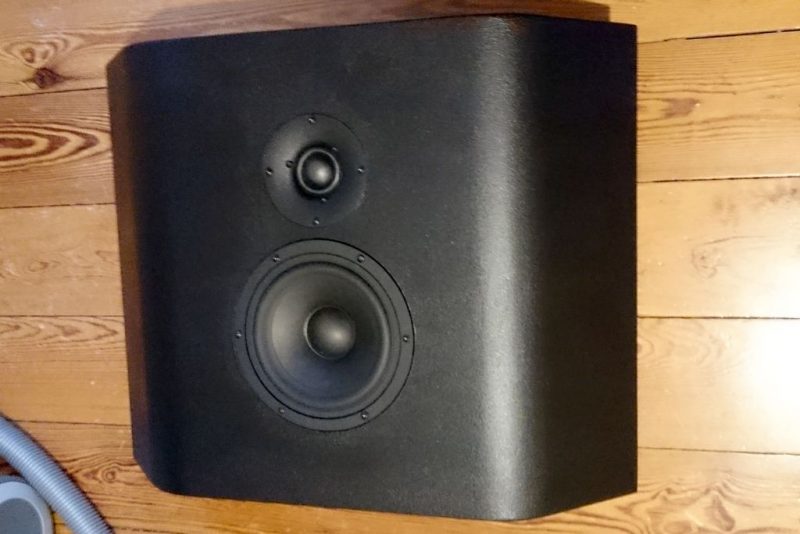 The home theater should be more beautiful and also: sound better. In addition, I felt like a speaker self-made. Since I lack the necessary know-how for my own development, a kit came close. I was looking for loudspeakers that are flat, because they should be operated behind a transparent screen without unnecessarily reducing the space. Also suitable for on-wall if possible. Also for the side and rear speakers, I find flat on-wall speakers optimal, as well as the side seats can still be balanced halfway balanced. If the loudspeakers protrude far into the room, the distance difference to listeners outside the reference space is relatively larger ("the left ear sticks to the left rear LS, while 2m is still on the right side ...").

When radiating, I prefer a good-natured, broad radiation without discoloration. Here too, I am concerned with the beloved ones in the cheap places, since I have to admit that I usually claim the reference place myself.

In terms of level I was certified by friends that I like to hear loud or the first question in a demo is always direction of the neighborhood relations. I myself would say that I like to hear loud, but not extremely loud, so quite similar in terms of level as in a commercial cinema. Of course the speakers should be able to do that. Low bass is not so important to me in terms of music and language. For home cinema effects like explosions, a "small" DBA from 8x 12 subwoofers takes care of that anyway.

In terms of sound characteristics, I now know that bands and AMTs usually sound too soft and horns and piezos too shrill. Say a normal dome seems to be suitable for me as a tweeter. Of course, the speakers should fit into the budget. As high quality, but also so expensive that I can afford to gradually even a full-blown Xnumx Atmos setup, so operate a total of eleven Wavewall 7.1.4 speakers.

All described requirements are met by the Wavewall 182. This was the decision for me to start with three pieces (Left, Center, Right).

As often as the end result was admired ("great shape"), I swore so much about the sloping sidewalls during the construction phase. The first box I actually built with a borrowed circular saw without rail (...!). What can I say, I had wanted it so and even that went. In the meantime, I have also done the sawing by means of a circular saw, as well as with a dip saw and clamped rail. The latter is definitely the best way. After the sawing followed the milling of the chassis recesses. With a cutting circle and router no problem. But even here, the special design takes its toll. To reach the depth of only 10cm a pocket has to be milled into the back wall. At some point I had a veritable turning worm from the whole milling shop. The glueing was also not quite trivial, as it is oblique boards in several axes to force firmly. But that was somehow in the end. During the subsequent grinding, I also tried a few techniques. To round the corners finally some material must be removed. I can recommend an eccentric grinder with coarse sandpaper for this.

A cardboard flap helped to judge the rounding. An electric planer wears off material very quickly, but requires controlled application or otherwise leaves a mogul slope, that is: rather not recommended. Spatula was not wrong then and as a finish, there was rolled-up Warnex textured paint in black.

What is still missing? Oh, the crossover. As far as I like painting by numbers. Alexander provided me with additional, calculated resistances to adjust the tweeter on the screen (compensate for high tone reduction). Now just phry everything in the tight housing, tighten and ready. First impression: With the whole MDF and the heavy, massive woofers (which make a massive and very high-quality impression), the boxes are surprisingly heavy. Of course, once hung, that's no problem anymore. 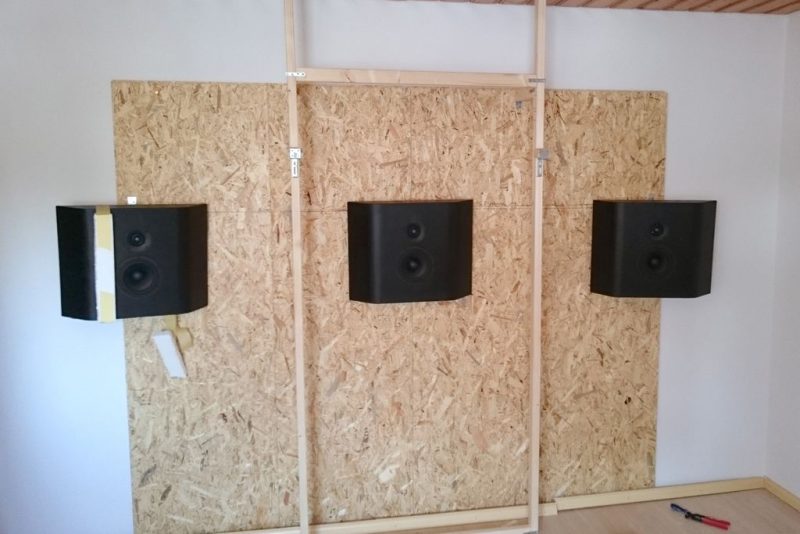 How do you sound now?

Measurements are provided by Alexander. There is a scapegoat from me now. The things can play loud and bring over nice punchy bass over. The sweetspot is nice and wide, all seats are subjectively very linear. This is definitely a strength of the speakers. The tweeters sound too dull and not too sharp - fits. The stage is more in depth than forward, or is located between the boxes. Nevertheless, it did not sound perfect at first. The sound did not break 100% of the speakers (figuratively speaking). This has changed after a break-in period, which others confirm. Now it suits and sounds a lot more airy and "liberated" than at the beginning.

Second impression: After a move, the boxes are now in the new home theater active. The new, about 30qm large room is now also equipped with many more absorbers. Eight packages of rock wool and a few square meters of Basotect are installed. In addition to the eight subwoofers of the DBA play there 7x Wavewall 182, as well as other four Sammelsurium speakers from my collection. The three Wavewall 182 front speakers no longer hang directly on the AVR Denon 4300, but on an external, cheap Thomann power amplifier, the E3-250. In terms of hi-fi enjoyment, the power amp is not outstanding, it lacks resolution and dynamics. Nevertheless, it sounds quite ok and has at least greater power reserves than the AVR. The description on Alexander's website already shows the rather low efficiency by uA the closed design, ie a strong amp is recommended for the wavewalls. Nevertheless, I was surprised by the change in sound by the PA power amp. With the additional power, the Wavewalls now play much better again. Above all, the gross dynamics increased sharply, it sounds as if now significantly larger speakers at work.

In addition an anecdote: In a small cinema screening, I played a stereo title (Daft Punk) before and was convinced L and R, as well as the subwoofer. This was a mistake, it only played two Wavewall 182, no sub! The bass boost through the wall installation, as well as a strong amp can bring the Wavewalls out in terms of bass really big. And that even with slightly screwed loudspeakers, FL and FR are bent on the listening position, but this is not absolutely necessary due to the good-natured radiation behavior. So: Played Wavewall 182 powered by a strong amp sounds awesome! As a sound-describing attribute, the word "strong" comes to mind in my heavily insulated home theater.

Status: Worth the whole thing? Hard to answer. It certainly does not hurt to have the homemade really feel like it, otherwise it just is not fun. If you just want to save, you better comb the second-hand market. Conversely, it is of course a great feeling to put self-built speakers into operation! From the resale value, it is always difficult with DIY speakers, as there is no big brand behind it. Looking at material costs vs. Market prices of new speakers, it looks very different. My subjective impression is that you have to lie down significantly above 500 €, maybe even around the 1000 €, for a new home theater speaker with the same performance.

Displacement can not be replaced by anything, except by a stronger power amplifier. That's not true of course, we all know the end of the story, displacement can only be replaced by EVEN MORE HUB! In this sense, I decided to round off the home theater with larger Wavewalls, so demand from Alexander the large version with two woofers. Fortunately, he let himself be moved, half of the development was probably already in his drawer. The development of 182.2 is now complete and it looks like I'm the first customer for it. Since the speakers will be concealed anyway I build this time the simple variant, so rectangular boxes, without pockets in the back wall. So it's planned: 3x the new, large "Wavewall 182.2" with two woofers as front and center. Rear and surround back, as well as 4x Height are populated with the normal Wavewall 182. That should be enough for now ...